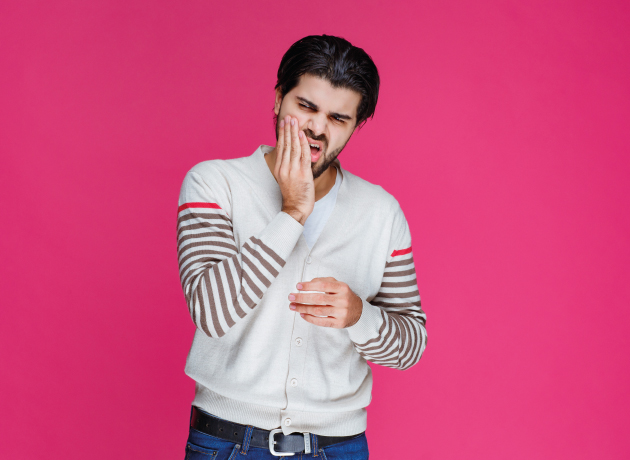 “Doctor,” a deep baritone voice reverberated in the clinic. I came out of the operatory and saw the person behind the voice. An emancipated five feet nine inch person was standing in the doorway with a polythene bag in his hand. “Yes sir, please come inside. How may I help you?” I asked. “Doctor, my name is Gunwant Rawal , I was the jailer of Sabarmati central jail and I have taught a lesson or two, to many a ruffians.” I took him inside my cabin and asked, “Tell me, what has brought you here?” he looked at me with his penetrating gaze & said, “This is what has brought me here,” saying that he dropped his polythene bag on the table.

He emptied the bag and I was surprised to see that it was full of dentures.” Doctor, I am fed up of these things, they are useless.” He looked at me, his eyes taunting me to accept the challenge. “My daughter in law is your patient and she praises you a lot. So, I thought after trying six other doctors, let me give you also a chance.”
I looked at him and then at the bag full of dentures,” do you really want to wear a denture?” I asked. “Do I have a choice?” he replied in an exasperated tone. So when I explained to him that he had a choice of getting a third set of teeth and that too fixed, he was genuinely surprised. I told him that with the help of Implants (titanium fixtures) placed into the jaw; I can give him fixed dentures that need not be removed.

He gave me a sceptical look and slowly removed an old slightly faded photograph from his pocket. He gave it to me and said,” Doctor, that is me with the notorious bootlegger Haneef, 20 years back, and look at me now.” I looked at the photo and saw a burly imposing figure in a jailer’s uniform with a handcuffed person. “Doctor I feel that the loss of teeth is responsible for this weight loss & change in my appearance, if what you say is true then I am ready, whatever may be the cost. Give me fixed teeth and rid me of this nuisance,” he said pointing at the dentures. I told him that I will have to clinically assess him first to decide whether it is possible or not.

On his approval we started planning the case on the same day. I got all the necessary investigations done. CBCT scan was done and then I concluded that we will be able to give him fixed dentures using the tried and tested, “All on four” concept. I explained further that we need to put four implants each in the upper and lower jaw. On the same day, after minor alterations to his old dentures we will fix it onto the implants. That will mark the end of first phase. After a period of 3-4 months during which the new bone forms around the implants placed in the jaw, we will start the second phase, till then he can use his old dentures fixed onto the implants. Again he was surprised to know that he will be able to use his old dentures as fixed teeth right from the first day of putting implants.

We carried out the procedure of implant placement using his old dentures as a guide. Immediately after that we attached the old dentures onto them. It was a full day dedicated only for Gunwantbhai with the team of Implant surgeon, Prosthodontist (specialist for dentures) and laboratory technician all working in a synchronised manner under one roof at Fine Feather dental. In the evening by 8 ‘O clock, Gunwantbhai walked out of the clinic with a fixed set of teeth in his mouth. We called him for regular follow up for 15 days.The second phase of making permanent fixed dentures was carried out after 4 months. Till then Gunwantbhai had got used to his old “nuisance dentures” so much that he was reluctant to replace them.

After another four to five visits at Fine Feather dental and a fortnight later, Gunwantbhai was ready to meet his family and friends with his third set of fixed teeth. While going out of the clinic with a beaming smile, he thumped my back and said, “Doctor, God gave me 2 sets of fixed teeth and now you have provided me with a third one.” As he was leaving I called him back and said, “Gunwantbhai, you have forgotten something.” He turned around looked at the polythene bag full of dentures and said with a finger pointing to his teeth,” I would rather have these than that.”