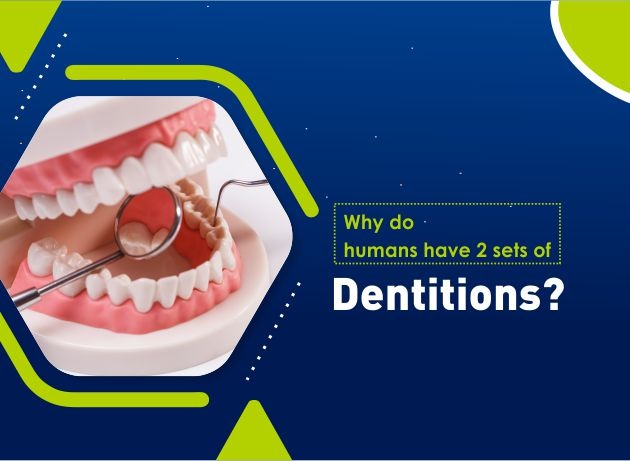 There are 2 sides to every story and the story of human teeth also has 2 sets of dentitions: the deciduous & the permanent!

This story is actually no big mystery. Humans grow two sets of teeth, a deciduous set (milk teeth, baby teeth) of 20 primary teeth (10 on the top and 10 on the bottom) and a permanent set of 32 permanent adult teeth, 16 on each upper and lower jaw.

Why humans have a deciduous set of teeth is refreshingly simple. Unlike other body parts, teeth do not change in size once fully developed. Since a full set of 32 adult-size permanent teeth are simply too big to be held in a baby’s jaw, these have to be preceded by the initial deciduous set. As the human jaw grows older and jaws begin to grow, one will observe gaps between the milk teeth which are filled up when replaced with the larger permanent teeth to give one the even appearance of an adult dentition.

As the ‘baby’ teeth are replaced by the adult teeth in the larger adult jaws, essentially they are maintaining the spacing and channels through which the permanent teeth will eventually grow.

Even though teeth start developing in the tiny embryo inside the womb, most babies are born toothless. In some rare cases, some teeth-like entities may emerge before birth, & are referred to as “natal teeth” but these soon fall out as baby teeth start erupting between the first six months and two years of humans’ lives. The milk teeth aid speech, help to shape the growing jaw, & even to chew food.

The last 3 adult molar teeth begin to form around the age of 6. These extra teeth do not replace any existing baby teeth. These molars are responsible for determining the shape of our lower jaw and face, and can affect the positioning of other permanent teeth. By the age of 13, most children will have the majority of their permanent teeth (28 out of 32) with only the 4 wisdom teeth left to erupt, which erupt in the four back corners of our mouth between the ages of 18 to 25 if the jaw is sufficiently large in size to accommodate them.

Most 6- to 8-year-olds sport a gap in their teeth when they smile. Unlike adults, they are not in the least bit worried about the missing tooth, and/or the empty cavity left behind because they & their parents are secure in the knowledge that a new tooth will shortly be growing in its place. This pinpoints the peculiar fact that, unlike most other body parts that show no regrowth, humans actually grow two sets of teeth! So, while there have been rare cases of hyperdontia, where an individual is born with “natal teeth”, extra or supernumerary teeth, or gets a third set of teeth after 90, for most of us, two sets of teeth are the maximum we will ever achieve.

At the other end of the spectrum, Polyphyodonts like sharks, geckos, crocodiles, manatees, elephants and kangaroos (a unique group of mammals in this class), are even more protected as they can replace their teeth multiple times throughout their lives. If a shark loses a tooth, it’s no big deal because sharks can have over 50,000 teeth in their lifetime. (the shark tooth conveyor belt phenomenon) Even elephants can replace four of their main teeth up to 6 times in a lifetime and Alligators can regenerate a lost tooth up to 50 times. Humans, on the other hand, have only 2 sets of teeth?

Regeneration is a very common phenomenon in the animal world. Salamanders, stone crabs, and starfish can regrow lost appendages & many predators, like the sharks and alligators, can regrow new teeth. As it turns out, humans too have the ability…….Cheng Ming Chuong, says that humans contain the DNA to regrow lost limbs and even teeth, but the ability isn’t “turned on”. So, can we Grow a third Set of Teeth?…… Maybe in the future, perhaps……. For now, sadly, the “tooth” of the matter is that we are born with all of the teeth we are ever going to grow in our mouths.

So, if you happen to lose an adult tooth in the current era, another one won’t grow and replace it. That is why it is important to take care of the teeth you do have because you won’t get another chance. However, this doesn’t mean you have to live the rest of your life with missing teeth. Thanks to modern dentistry, your dentist at Fine Feather’s can replace your lost teeth with dentures, implants, and bridges. Again, there’s no substitute for the natural teeth that you were born with, which, again, your dentist at Fine Feather’s can help you preserve.

Is scaling good for our gums and teeth?

What is Dental Floss? How does one use it?